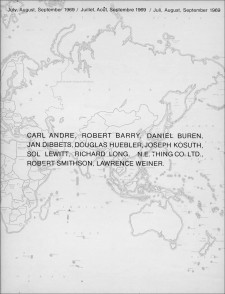 1969
Seth Siegelaub, editor
An exhibition in which 11 artists each made a work in a different part of the world between July – September 1969, and for which the trilingual catalogue (in English, French and German) served as the guide to the location and description of each work. The participating artists were Carl Andre in The Hague, Robert Barry in Baltimore, Daniel Buren in Paris, Jan Dibbets in Amsterdam, Douglas Huebler in Los Angeles, Joseph Kosuth in New Mexico, Sol LeWitt in Düsseldorf, Richard Long in Bristol, N.E. Thing Co. Ltd. in Vancouver, Robert Smithson in Yucatan, and Lawrence Weiner in Niagara Falls.