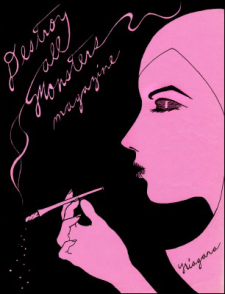 Completed over the course of the last year, this limited edition is comprised of the publication signed by the collective’s original members: Mike Kelley, Cary Loren, Niagara, and Jim Shaw. Also included is an 8×10 silver print by Cary Loren and a small glycine baggie of dirt from God’s Oasis–the commune Mike Kelley and Jim Shaw lived in from 1974 to 1976 and which served as the collective’s musical practice space. The first 30 copies of the edition of 75 are $100 and the last 45 copies of the edition are $200
SOLD OUT

Destroy All Monsters Magazine was edited by Cary Loren and contained artwork, photographs, and flyers from band mates Mike Kelley, Cary Loren, Niagara, and Jim Shaw. Printed using any papers and techniques available to the band, the issues combine the cut and paste tactics of punk zines with a psychedelic affinity for color. Destroy All Monsters Magazine functions as a kind of manifesto, providing insight into the band through densely layered pages with movie imagery, kitsch, cartoons, delicate drawings, and counter-culture collages. While Destroy All Monsters has been the subject of recent exhibitions and partial reprints, this is the first time that all issues have been reprinted.