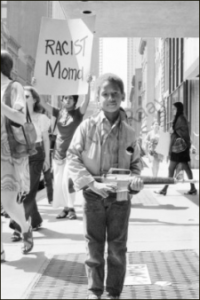 The Art Workers’ Coalition (AWC) was a loose group of artists, writers, and members of the creative community formed in January 1969 after the artist Takis protested the Museum of Modern Art (MoMA) by removing his sculpture from their exhibition, “The Museum as Seen at the End of the Mechanical Age.” In the case with Takis, the artist was concerned with his ability to control the exhibition of his work after it had been sold (the Museum had exhibited his work against his wishes because they owned it and felt that their right of ownership superseded his rights as an artist to control its exhibition).

This initial protest was a spark that ignited the coalition—which gathered members and concerns exponentially throughout the early months of 1969. At the time, the Art Workers’ Coalition was concerned with the responsibility of museums to artists and aimed their efforts at building a dialogue between themselves and MoMA. Another early issue was better representation of Black and Puerto Rican artists in MoMA as well as the other local museums.

As the coalition grew in membership, so did its concerns, which the Art Workers’ Coalition sought to publicly discuss at MoMA. When these efforts proved unsuccessful, the coalition held an Open Hearing at the School of the Visual Arts on April 10, 1969, in which hundreds of people attended. Written statements were collected (some of which were read and some of which were not) and the proceedings were later transcribed. The statements were published in book form by the AWC under the name Open Hearing. At the same time, the AWC also published Documents 1 a collection of letters, press, and ephemera documenting the formation of the Coalition and its dialogue with MoMA. Both Open Hearing andDocuments 1 can be downloaded above.

Following the Open Hearing, AWC’s emphasis broadened to address the political and social events and concerns of its time: racism, sexism, abortion rights, Vietnam, and Kent State, among others. With so many issues, AWC eventually splintered, with groups like Women Artists in Revolution, Guerilla Art Action Group, and Art Strike addressing specific concerns while remaining affiliated with AWC.

Art Workers Coalition remained active through Spring of 1971, with its last protest at the Guggenheim, which had cancelled a solo exhibition by Hans Haacke, on May 1, 1971. Many of its splinter groups continued throughout the 70s and 80s and were fundamental to addressing the unequal representation of the minority and women artists in the art world—a battle that is still being fought today.

Primary Information’s exhibition at PS1 will trace the history of the AWC through archival documents and photographs obtained through private as well institutional sources (including MoMA).

For more information on the Art Workers’ Coalition, please see: